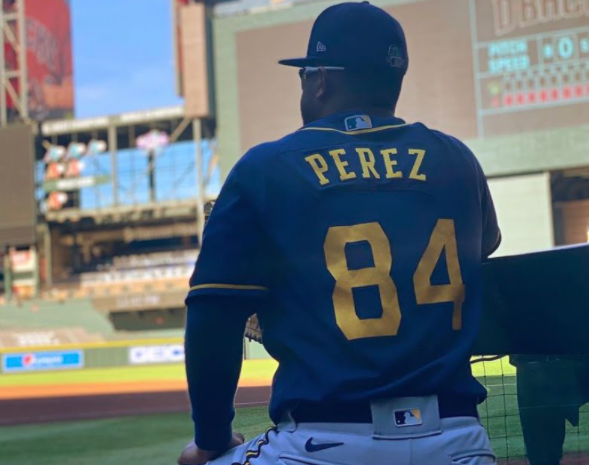 17 Year Old Is Ready To Play for the Brewers

While some teenage baseball players in The United States are in their last years of high school playing baseball as a hobby, training to obtain a scholarship or, to be drafted, in South America it is a different story. In most South American countries, boys are drafted when they are 16 and begin their baseball journey as professionals. This may sound crazy for some people but it is the norm in South America. Now, you may be asking, how can a 16 or 17-year-old boy be a professional and feel prepared?

The story of Hedbert Perez is a great example of being drafted at a young age, he is a  17-year-old center fielder from Venezuela who signed with the Milwaukee Brewers when he was 16. He is Milwaukee Brewers’ #2 prospect and this year will be playing with the majors during spring training 2021, being one of the youngest players to assist the Cactus League. I had the opportunity to interview him and ask him a few questions to share with high school baseball players to help them have an idea of what a future in baseball could look like.

The first question I asked Hedbert Perez was “What do you think is the key to be considered a prospect as a 17-year-old player?”

Hedbert answered: “I think that I am considered a prospect because of all the hard work I always put on during games and practices, the results of improvement I have shown, and the responsibility I have shown when it comes to playing baseball and representing my team.”

Another question asked was “Knowing that those are the elements that have helped you succeed, do you think that they helped you see action in your career in your first year as a professional in the middle of a pandemic? ”

He responded:  “Yes, even though last year was tough for all of us but thanks to everything I mentioned I think that those elements most definitely helped me to be considered a good addition to last year’s taxi squad at such a young age.”

Perez was also asked “Does this mean that there will be more action in your career this spring training?

He answered:  “Absolutely, a couple of days ago I received a call from the organization inviting me to play with the big league team this spring training where I will be able to play with major leagues players and I could learn a lot and show that I will not waste that opportunity!”

Lastly, I asked him “What is some advice you would give to other boys your age who want to pursue a career in baseball?”

Perez said, “First I would like to say that education is very important and should never be left aside, in my experience I went to a bilingual school, and knowing two languages has helped me a lot with communicating with my teammates and coaches. Also, focus on what is important, having priorities and goals will help you be more determined on what you want to achieve, there is time for everything and to have fun but focusing on what matters is what is going to get you on top”

After this interview, we can conclude that no matter what age you are there is always a possibility of being great and successful if you put your mind to it, Hedbert Perez is one of the examples of successful teenagers that young kids should look up to.