Zachary Frye: A Story of Determination and Hustle 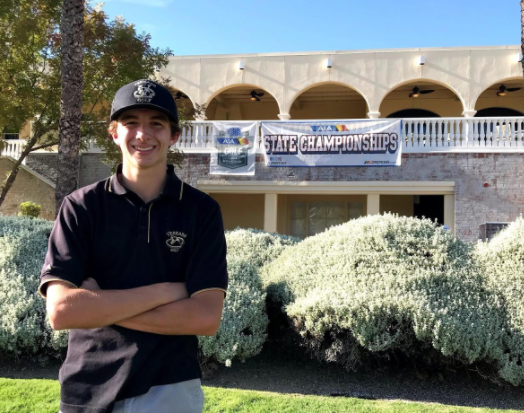 How far hard work can take someone and a story about the concept of never giving up no matter the odds?

To tell this story, there is no better subject than the story of my twin brother Zachary. Let’s start from the beginning. In the summer of 2017, golf wasn’t even on Zach’s mind in fact it was the last thing he thought about when it came to playing a completely new sport. Prior to him picking up a club, Zach was a seasoned veteran in the tough and competitive world of Motocross racing from the age of 6 till he was 11, but due to a string of serious injuries including 5 concussions and 6 broken bones, he was forced to give up the life that he had dedicated himself to in order to preserve his mind and body. For a while, he had absolutely no idea what he would do next and which direction to go. For a while, he played around with the idea of picking up the sport of football, baseball, and soccer, but nothing seemed to stick for him. Flashback to the summer of 2017 and all that would change. It was my dad who proposed the idea of picking up golf to him which doesn’t sound appealing to him. Coming from a world of fast-paced action and heart-pounding adrenaline to the slow-paced nature of golf sounded absurd to him.

But with a bit more coaxing and long talks, Zach was finally willing to give golf a shot. Right away, as soon as he picked up a golf club, it was apparent that he was destined to play the sport of golf. Despite the fact that he was naturally gifted from the beginning, it was made clear to him through a string of rough first tournaments that this was not going to be an easy road to walk down. Compared to kids at his age that have been playing golf since they could walk, Zach had a ways to go but was determined to become the best no matter what it took. From that moment on, he would spend every waking moment at the course from dusk till dawn, in rain or even snow, it didn’t matter to him, he was determined to be a champion. Though his physical skills were all there, it wasn’t an easy transition for him mentally. Coming from Motocross to golf was a completely new world for him mentally because unlike Motocross, he now had to keep every emotion he felt in check in order to play well. This proved to be difficult for him, but he wasn’t giving up anytime soon because he saw that he had the potential to be something great. For months and months, he chipped away non-stop to perfect his golf game in time for tryouts which would prove to pay off as he made the varsity team after only a couple of months on the course. This is when everything would change for him. This is when he realized that golf wasn’t just a sport to him, but a lifestyle.

After having a successful freshman and sophomore year, the only place to go was up and up he went quickly climbing up the ranks as one of the best golfers in the state making it to state his junior and senior year finishing in the top 50 out of nearly 80 players both years in a row and cementing himself in the top 50 of one of the best in the state. Now he is moving on to the next level playing collegiate golf at Glendale Community with hopes of making a D1 roster after 2 years. His main goal is to fight his way into the Pga and make his name heard and with how much time and effort he puts into his craft I am confident that he will achieve that goal. If anyone can take anything away from this story, it is that no matter what you face in life and no matter how large the odds are against you, with a positive mindset and determination you can achieve anything you set your mind to. If anyone reading this faces a challenge in their life, I want you to remember this story and remember that you have the power to achieve anything you put your mind to you just need to trust in yourself and work your tail off even if it seems impossible. Though life can be a constant struggle, remember that the greatest teacher in life is failure and is the only way to grow because if we never face adversity, we will never know how to overcome the challenges that life throws at us. Don’t take life too seriously but keep a strong mentality and nothing will stop you from achieving your wildest dreams no matter how big they are. You are stronger than you think and have more power than you know so take life head-on and remember to never give up.