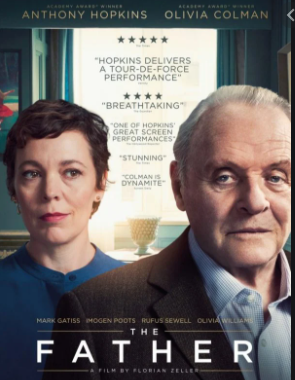 After originally being scheduled to release in the fall of last year, Florian Zeller’s recent film “The Father” is slowly starting to hit theaters for the general public, and wow did it live up to expectations.

“The Father” stars legendary actor Anthony Hopkins and actress Olivia Coleman, where it follows “Anthony”, played by Anthony Hopkins, as a father who is struggling with Alzheimer’s/Dementia and how he is on both a mental and physical decline. Olivia Coleman plays “Anne”, Anthony’s daughter, and is really the only person he has left in his life.

“The Father” is quite gut-wrenching, and anybody who has had a family member that experienced Dementia or Alzheimer’s will be hit harder than the average viewer. A story that really only takes place over a few months feels as if it took place over several years. Anyone not familiar with how dementia works will get a deep look into how devastating it truly is in this film.

Aside from how emotional this film can be, it is definitely one of the best films in the past year. Both on a technical level and a theatrical level, this film amazed me with what it was able to do.

This film, on a technical level, is quite fascinating. From the amazing camera work and camera angles to the editing of this film, it was quite incredible. “The Father” also received a well-deserved Oscar nomination in the “film editing” category. Florian Zeller managed to create such a hard-hitting emotional film while staying within the same small set the entire movie. The impact this film made with the small budget and incredible technical work makes this one of the best films of this past year.

Moving on to how theatrically impressive this film was, the acting was where this film really put it above others for me. Anthony Hopkins put on arguably his best on-screen performance of his career, meanwhile, Olivia Coleman followed suit. It goes to show that such a simple storyline of a film can be very impactful with the right people behind it and in the film. Rightfully so, both Anthony Hopkins and Olivia Coleman got nominated for an Oscar in their appropriate acting category. They were well deserved.

All in all, “The Father”, directed by Florian Zeller, was easily one of my favorite movies since the beginning of 2020. It could be because of how close to home it hit, but regardless, this is easily a contender for one of my favorite films of this past year.