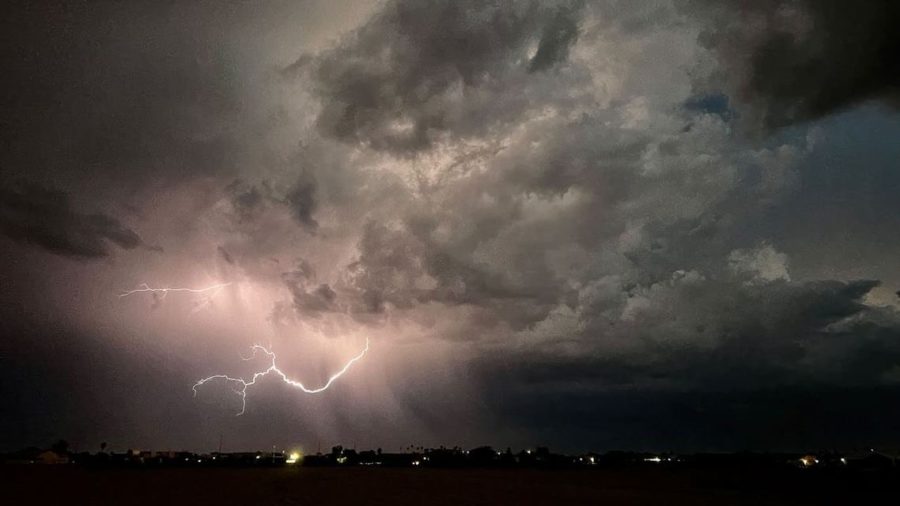 Crazy Weather is Just the Start 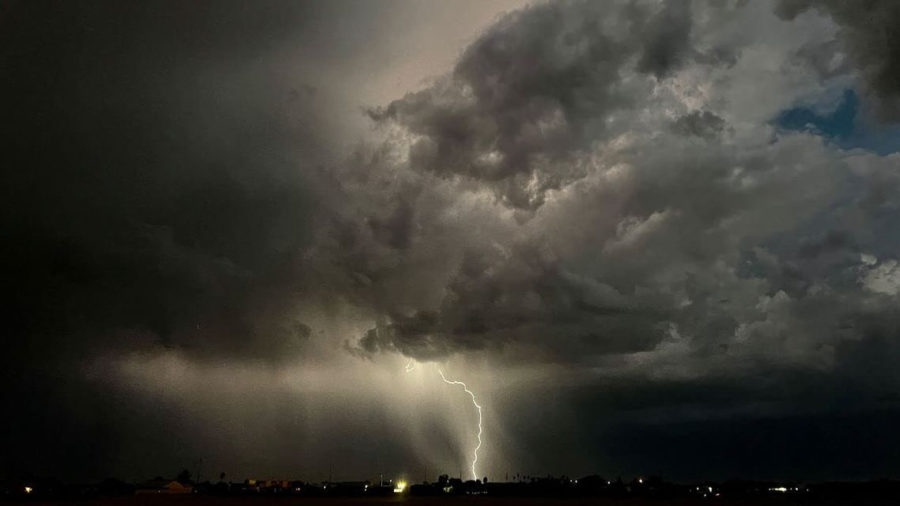 Lightning around the Valley of Sun signals another round of monsoon storms.

The floods that are happening in Australia are devastating. The southeastern parts of Australia, which have some of the most condensed amounts of the population, are getting emergency flood warnings after a harsh amount of rain that’s fallen on them throughout October. The fierce weather brought over a month’s worth of rainfall to southeast Australia consisting of Victoria, New South Wales, and the island of Tasmania. These states are filled with cities and rural areas that are just soaked in water. Victoria is considered to have been hit the hardest by the flooding, with several rivers in the state at major flood levels. With all this flooding Australia remains on evacuation alert. The emergency services authorities fear that the state of Victoria’s potentially 34,000 homes could be isolated or inundated. The floods took many of the citizens by surprise, especially since earlier in October Sydney, Australia’s biggest city, had its wettest year since 1858.

In early spring of this year, Southern Queensland and northern New South Wales received an entire year’s worth of rainfall in a week. This was a result of Queensland’s worst flooding since 2011, having exceeded 14.6 ft of water. It seems it was only a start, having the rest of the southeast of Australia follow in its footsteps later in the year. With all the weather going on in Australia, it would lead to downpours on the 13th and 14th of October, along with the rivers already overflowing from previous rainfall in the past few weeks. Strathbogie is a small town having a population of a little over 11,000 people that got over 8 inches of rain within 24 hours, making it more than twice their October average rainfall. While that is a lot of rainfall, Tasmania is covered in 15 inches of rain when its average is 8.3 inches, it’s also nearly double its October rainfall average.

While flooding in Australia isn’t a foreign thing that’s happened in our lifetime, the severity of the flooding is so much more notable than the previous years. It feels as though it’s almost unnatural how much it’s flooded in that small amount of time. Yet, Australia isn’t the only place with a change of weather, our very own Arizona has been all over the place, ranging from heavy rains to massive dust storms. The concept of rain and dust storms isn’t new to Arizona, but the amount and severity are. This change in weather is sending not only Arizona, but everywhere in the world down a negative hill, and a hopefully reversible one.

Arizona had noticeably different weather this October, especially in comparison to the past few years. In 2022, Arizona had overwhelmingly hot weather from September that had seeped into October for the first 2 weeks, and then it started to cool down considerably. In the past 3 years, the heat is spread through the entire month, only cooling off towards the end of the month when a temperature averaged 75℉ to 95℉ in the afternoon. However, in 2022 with the weather change, the number of storms and rainfall increased and spread out through October, taking the citizens of Arizona by surprise. Flash floods in Flagstaff, Arizona sent debris from prior wildfires pouring through properties and streets.

Arizona’s weather changes don’t just stop at the rain, the massive dust storm that Arizona had to kick off in October should’ve indicated that the weather wouldn’t even be close to how it was in previous years. The last dust storm of notability in this century was the dust storm on July 5th, 2011 that had pushed huge walls of dust into the desert south of Pheonix.  ”

All these weather fluctuations in Arizona and around the world make people wonder what is happening. It’s all caused by climate change, it has impacted nearly every aspect of people’s lives. Whether it be increasing the impact or experiencing its effects of it. The common thought about climate change is that it heats the earth, making our summers hotter and creating more storms. While both are true it’s not the only effects climate change has, it also has great effects on cold weather. Seeing the pictures of polar bears floating on a small piece of ice makes it harder to believe that climate change can make the weather colder when it’s a misconception.

Due to the Earth’s heating the polar vortex, the flow of cold air that helps keep both the North and South poles cold, expands making it so the cold weather comes in so quickly in southern states, such as Arizona. The considerable amount of rain that has been happening is also due to climate change. It’s a take-and-give relationship. The earth heating up more brings a surplus of water that is added into the atmosphere and with that, Arizona gets more and heavier rain since it has to go somewhere. While this weather isn’t necessarily the most out-of-this-world experience, it’s only the start.

Climate change is not an overnight fix, it’s the farthest thing from it. A common thought among people is that their involvement in the problem is so small that it doesn’t matter that much. If every person in the world thought their effects were so minuscule, they’d be clouding the bigger picture. While a majority of it is out of a regular person’s control, that doesn’t mean they shouldn’t be conscious or concerned about climate change and how it’s going to affect the younger generations that will come after them. It may feel out of control, but not everything has to be, doing small things is a start and a start is better than nothing. At the rate that greenhouse gases are being produced, there isn’t much time to waste. 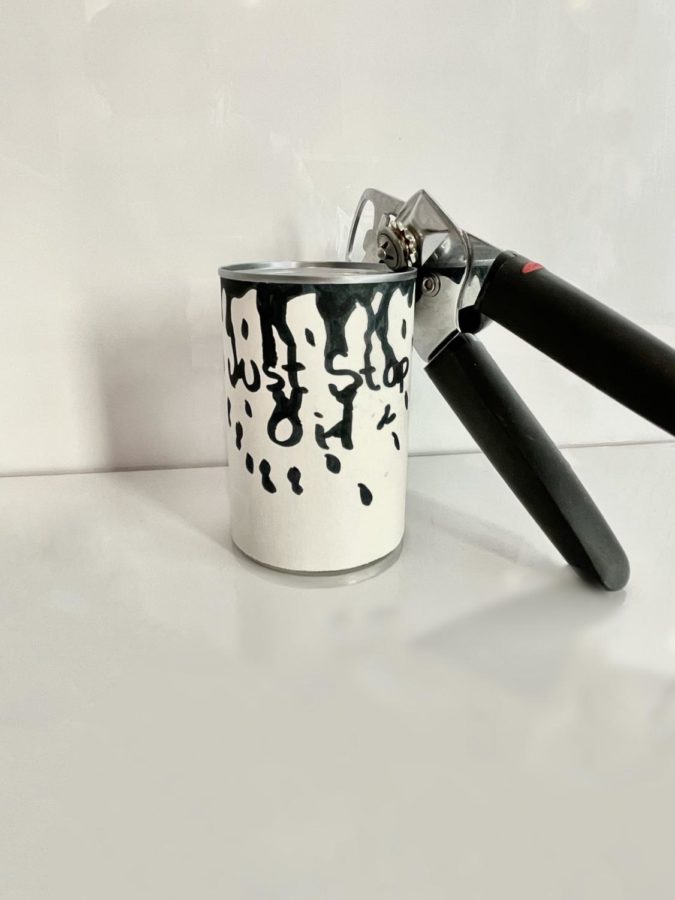 Some protesters believe the key to ending global warming lies in oil production.

It’s no secret that our world is in danger of being permanently harmed by global warming.

Climate change specialists predict that the impact of our actions may be irreversible by 2050 if we don’t change to more eco-friendly practices. The idea of the world reaching a tipping point that causes a slow death for our home planet is scary.”

With country leaders trying to stop this occurrence, it begs the question – are they acting fast enough?

Many ordinary people have decided to take it into their own hands to try and make a difference. Lately, it has been a trend to get the attention of higher-ups on a more public scale. This year alone, there have been several incidents of protestors vandalizing important works of art in museums. Most of the time, these protestors will sport a “JUST STOP OIL” t-shirt and then finish the job by gluing themselves to a wall. These protests, while strange, just might make enough sense for people to listen. Sure, wrecking priceless art that can’t ever be recreated by the original hand is quite radical, but there is actually no damage done to any of the pieces. In most museums, paintings are covered with a thin sheet of protective glass. Therefore, throwing soup or cake at it does not harm the paintings at all. This, however, is not always the case for frames. Frames are often wrecked in the act, but that seems a small price to pay to get an urgent message across. The window for stopping climate change is quickly closing and when people prioritize other issues over this, they give our world less and less of a chance of repairing itself. One of the more recent occurrences, when 2 protestors threw cans of tomato soup onto Van Gogh’s famous sunflower painting, gained immense media attention. So far, not much has been done by world leaders in regard to climate change since this event. The group, under the Just Stop Oil moniker, has been performing peaceful protests, such as this, all across the UK. The soup-on-paintings tactic has been more of a recent stunt and appears to be working in starting the conversation on a more eco-friendly lifestyle.

In light of these protests, many people are shocked, and some even disgusted, that people would destroy priceless art to simply make a statement, but isn’t our world priceless too? And if none of the paintings thus far have been damaged, then there is no argument for why protests should be stopped. People need to realize the urgency and intent of these protests to be able to understand why the Just Stop Oil group even exists. Maybe it’s time to consider what Just Stop Oil protestor, Phoebe Plummer, meant when she asked those attending London’s National Gallery, “What is worth more – art or life?”